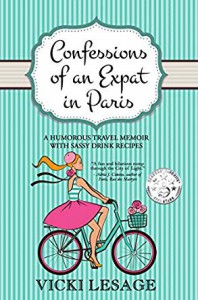 From champagne bottles to baby bottles, this memoir offers a humorous glimpse of an American expat’s years abroad…

Party girl Vicki moved to Paris hoping to drink wine and fall in love. She accomplished both goals, but not without bumps along the way: romantic encounters gone awry, uniquely French situations threatening her sanity, and two adorable yet tireless kids keeping her on her toes…

Discover the real Paris through Vicki’s eyes as she shows you the funny side of life, love, and raising a family in the City of Light. Each chapter is paired with a delicious cocktail recipe! Enjoy drinks like the Sangria Spritzer, Pretty Good Bloody Mary, and Teeny Bellini.

Paris Potty Girl details her first few years in Paris, from bar-hopping to getting her first apartment to meeting her husband and Paris Potty Trainer, of course, details pregnancies and getting used to parenthood.

Confessions of an Expat in Paris is an anthology of anecdotes spanning across both these eras in Vicki Lesage’s life. You’ll learn about the cheesy and downright weird pick-up lines she received from French guys as well as the time she might have eaten part of her friend’s thumb.

Each anecdote is paired with a drink recipe, many of which sound really good. I can’t wait to try the mulled gin recipe.

For when you need to recover from face mask fails

I really enjoyed Expat in Paris. The stories are usually hilarious and sometimes just a little bit cringy in a good way. Others are sweet and make me smile, like when she was on her honeymoon with her husband.

With her first two books, I felt like there was more of an overall story instead of disjointed anecdotes. As much as I liked being able to enjoy a quick and witty snapshot of her life before I had to get back to my own, I think I preferred the more continuous storyline in Party Girl and Potty Trainer.

While some of the stories were without a doubt hilariously absurd, like her boss’s father asking about how her vaginal rejuvenation was coming along in front of her coworkers (what the everloving fuck), others were less climactic. Lesage included an entire chapter about how she’s an awkward dancer, except when she did the Dirty Dancing move with her brother on her wedding.

The dancing chapter felt more like a summary than a specific moment in her life, which made my eyes glaze over. And she only casually mentioned what could have been some good stories, like her drunkenly dancing on tabletops in public. I would have loved a complete chapter about one of those times, but they are only mentioned now and then.

Vicki Lesage often makes me laugh out loud when reading her books. Her chapter “10 Ways Living in Paris is Like Dental Work” will always make me smile. She talks about how both involve interesting flavors, a lot of paperwork, and a lot of money, and I’ll go “Oh shit, she’s right.”

Now and then, however, her jokes miss the mark. At one point she veered off-topic to stage an imaginary trial to defend herself against herself for eating so much Ben and Jerry’s ice cream and then, within the trial, she goes even more off-topic by talking about how France doesn’t have Phish Food flavor until I just wanted to skip the chapter.

As of this review, I still haven’t tried any of the drink recipes, but I trust a former hardcore drinker like Vicki Lesage to come up with some good drinks, although I don’t think I’ll ever try The Fluoride Treatment because, well, ew. Not the drink itself, but the name. Even though it’s relevant to the chapter, I’m weirdly squeamish.

However, most of these drinks are probably not for amateurs like me, who drink wine out of a box and can’t tell the difference between Stella Artois and Schlitz (I’m guessing. I’ve never actually had Schlitz. But Stella Artois tastes like every other beer to me).

With the exception of the mulled gin, most of the drink recipes require either a martini shaker or a blender. You can probably mostly pull off these recipes without either, though. Just don’t take a page out of Lesage’s book and use lite pancake syrup instead of honey.

I rate Confessions of an Expat in Paris 4 out of 5 stars. It’s a hilarious book that I recommend to anyone who wants a light-hearted memoir. You can get it for free on Kindle Unlimited.